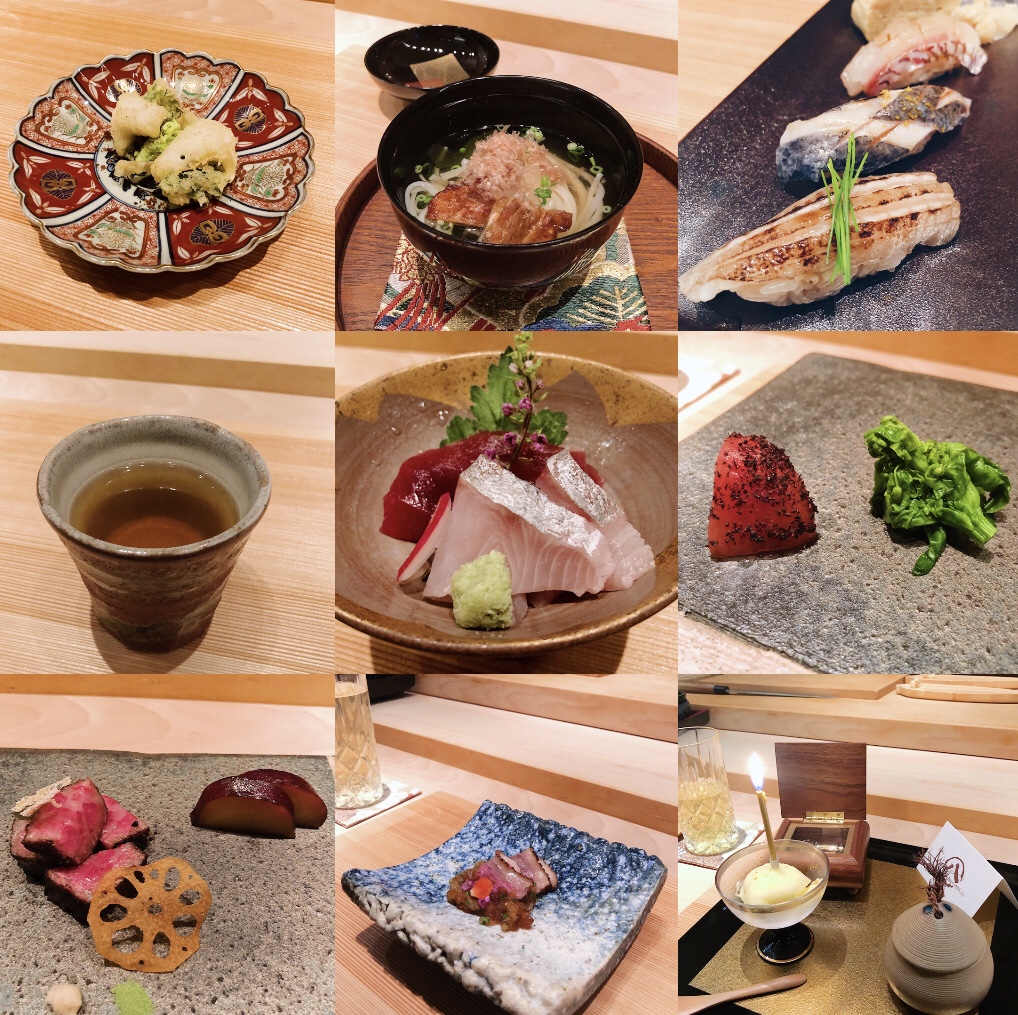 Celebrated my birthday this year at Hachi Restaurant at the National Gallery of Singapore. My friend suggested this omakase place, and I’ve never been here and was quite excited to try.

We got counter seats most importantly! The chef in front of us was quite quiet for the most part, not the chatty sort. But he happily answered all of our endless questions!

It was totally my fault that I was late for the 12pm reservation (my Grab driver disappeared to some other round and unit number and I had to hunt him down, he also didn’t seem to know where to alight me…) but our food was only served like almost one hour later 🥲 So the wait for the food was quite long strangely.

I opted for no scallops so the first item on the omakase lunch which they served me was this tempura whitebait with oba leaf and edamame puree. The puree was quite nutty and almondy tasting. The fish tempura was alright. The original omakase item is the tempura scallop wrapped in seaweed by the way. 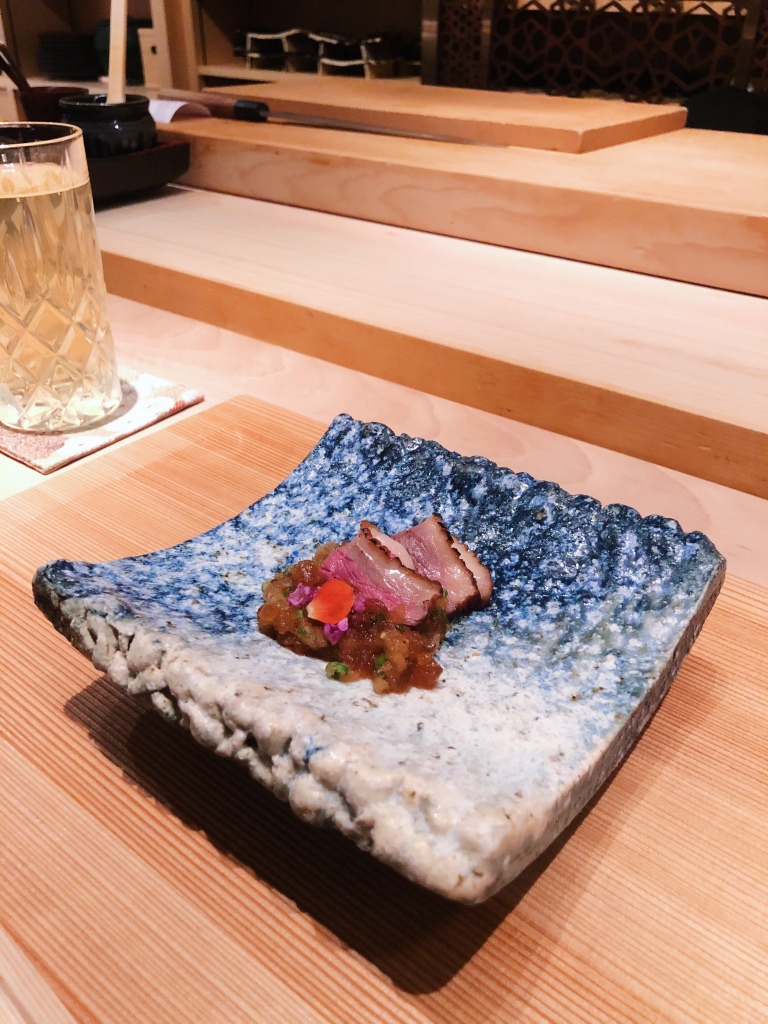 Next, they served this smoked duck with ponzu jelly. For shellfish lovers, they’ll get an oyster instead of duck. I felt it was alright only, the ponzu jelly was a bit too intense and strong and sourish. Personally I felt that the food here isn’t really done in a Japanese style but perhaps a Singaporean take or interpretation (meaning the flavours here are stronger rather than more plain and nuanced) instead. For context, Hachi Restaurant was established in 1999 and prides itself on being the pioneer omakase restaurant in Singapore.

After that was sashimi time.

We each had two pieces of kanpachi (amberjack) and maguro (tuna) served with chrysanthemum leaf (slightly bitter flavour), wasabi, radish and shiso flower (I think).

Next up was the grilled food: there were four cubes of grilled wagyu beef, served with basil salt and mountain wasabi, sweet potato, and lotus and sardine chips.

The sardine chip reminded me of those strips of fish snacks you get in convenience stores in Singapore. The lotus chip was alright, nothing much to shout about. The beef was okay. The sweet potato was alright too.

I then had the momotaro tomato (still not sure what’s so special about this Japanese tomato) with dried shiso leaf (quite intense plum flavour) and baby kailan. Quite clean tasting. 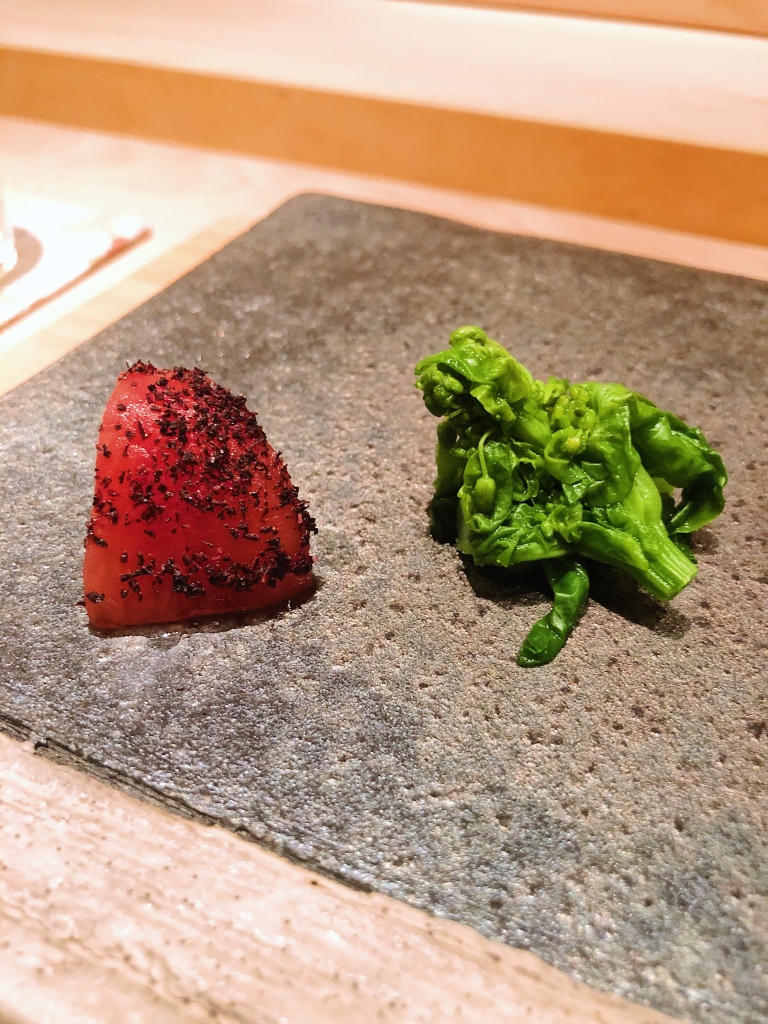 (Oh yes before I forget, there was also chawanmushi but I don’t eat that so I gave it to my friend.)

Next was the sushi: one sea bream sushi, one butterfish sushi with grated yuzu, one grilled flounder sushi with baby chives. The last one had the aburi flavour to it. 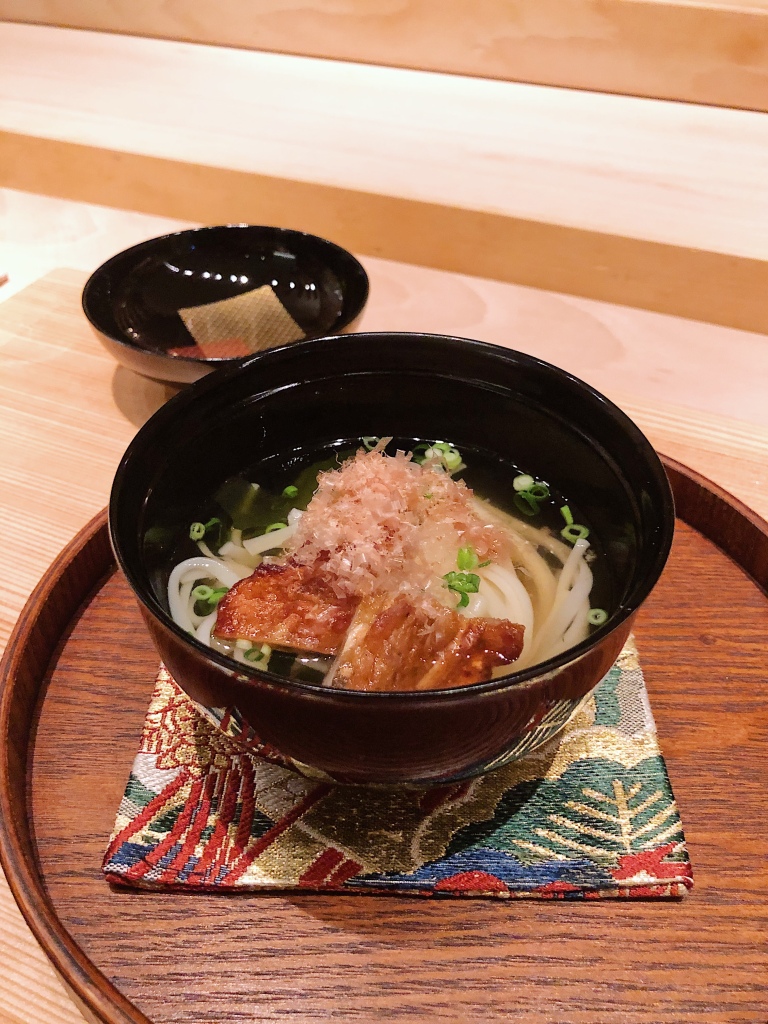 Finally there was the hot noodles with soup and fishcake and bonito flakes. Thought this was quite ordinary and nothing special: probably could DIY from Donki products really.

Hojicha was then served, which was a nice respite from all the food, gotta wash all that food down.

Then came the (not so surprising) birthday surprise! A birthday card from Hachi Restaurant, a cute wooden music box playing the tune of Happy Birthday, yuzu sorbet, and lemon jelly with black beans.

All in all, I paid about S$140 for this 9 course meal (or 8, if you exclude the hojicha). The restaurant gave us a $50 voucher for dinner at Hachi Restaurant.

Personally, we felt that the hefty S$140 price tag wasn’t justified and that the beef omakase which is about S$10++ more, had way more premium ingredients. Honestly for S$140, I would have expected much fresher and better quality (like the fish for instance!) ingredients rather than less premium stuff (kailan is quite easy to grow for example and isn’t anything special, the noodles and fishcake are also really nothing special, maguro also isn’t anything special).

To me this meal should probably cost a customer about S$70-S$80 at most, and felt that the food quality and choices could have been a lot better!

Food quality: Okay, not amazing, actually not superb quality for the price.

Service: Alright. A little so-so, nothing really memorable or special for the price tag. At least they responded quickly to my reservation and the reservation wasn’t a challenge to make! Food was quite slowly served, really not sure why, was it ‘cos we were late? Feel like I’ve been to better restaurants..

Ambience: It was okay, I could hear other customer’s conversations. Wish this place was more Japanese. Personally preferred an omakase place like Hashida Sushi. Hachi Restaurant seems to focus more on grilled food rather than on sushi.

Please see below on how this same omakase lunch used to (1) firstly cost a lot less and (2) have premium ingredients such as uni, compared to now where it’s so much more expensive and less premium: